Welcome to 4Beat Percussion Group's latest performance, Knallen! This energetic and fascinating show will take you on a musical journey through different countries and cultures, introducing you to the power of the drum.

4Beat has already made a name for themselves with their first program, "The Power of the Drum," performing over 120 shows in Dutch theaters, schools, and festivals. Now, they are back with an exciting new program that combines the sounds of traditional drums and percussion from Africa, Asia, and Latin America with those of a DJ and mystical, oriental percussion.

But the show isn't just about the drums - vocals are also featured, adding an extra layer of excitement to the performance. This is a hot and thrilling experience that you won't want to miss.

Don't miss your chance to see 4Beat Percussion Group's Knallen and be prepared for a musical adventure like no other. 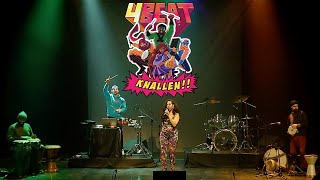